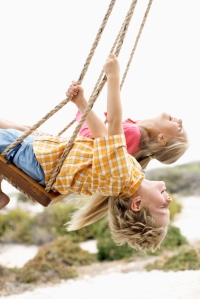 I had to chuckle a little when I saw this ‘new study’ that says preschoolers and kindergarteners need lots of time…. wait for it… playing outside!

I cringe to think what this ground breaking research cost when they could have come to the same conclusion by asking any of my mom-friends. Still, the experts can’t just say kids need to play. The experts have to define the cognitive benefits of playing by saying they are applying what they learn in the class room.

Would it be so hard to just say kids need to play because they are kids? Would be so crazy to say kids have lots of energy and they need to expend it to be happy kids?

The article states: “Researchers found concerns about playground safety by staff and parents contributed to more sedentary activities in youngsters. Some parents even requested that their child stay indoors instead of heading outside to play. Another contributing factor to kids getting less playtime are state safety guidelines for play structures, which have gotten stricter over time, rendering some of the equipment less challenging or interesting for children.” 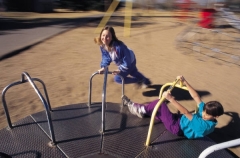 That’s for sure. When my kids were little I took them to a park which had 20 plus year old equipment. I had a temporary freak out and then had to ask myself why.  Do I really think my kids are going to go plunging off the slide just because it isn’t encased in plastic walls? They find way more dangerous (and apparently interesting) things to do out in the back forty. It’s those brushes with danger (usually perceived, but sometimes actual) that they talk about again and again. It’s that sense of facing the fear that they revel in. They don’t repeatedly retell the  game of hang-on-the-bar-that’s-three-feet-off-the-ground.

I know some school playgrounds have so many rules it’s almost as if no playing is allowed on the playground.

Let them play.  Now we finally know that it’s good for them.